The Path to Self Governance 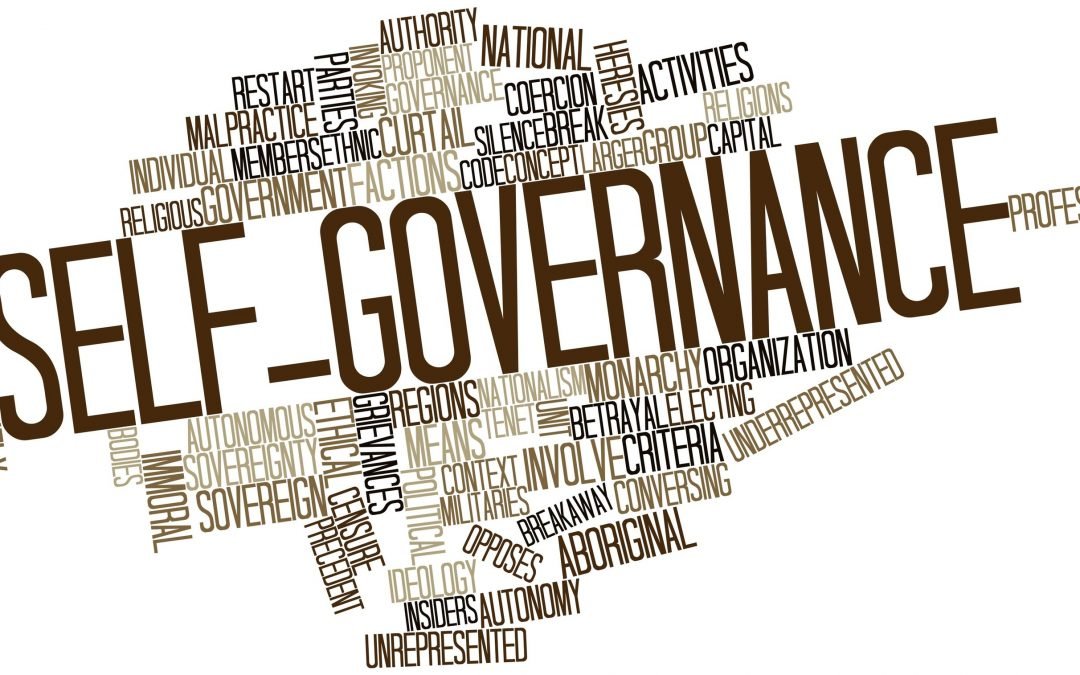 Self-Governance is the Future!

We the PEOPLE have given power of attorney over to governments, politicians and corporations to tell us what to do, how to do it and when to do it. In order for our reality to change, people must believe that they have the right, duty, and ability to govern themselves. The people have the right to Self-Govern by creating a parallel society that is OF the people, FOR the people and BY the people.

Real self-government — individuals ruling themselves — is the only form of political freedom. Any other type is slavery. Any other kind that promises freedom by giving others power over you is a lie, even if it’s a well-meaning lie.

Self–governance allows communities or towns to shape their social and economic well-being and future by developing and enforcing their own laws regarding education, culture, finance and lands.

We have been raised to believe that government is the the only way and that they are the AUTHORITY. Now we are coming out of this amnesia and many are asking the question, “Do we really need a government?” The answer has always been, “NO!” We do not need to wait for provincial or federal governments to tell us what we can and cannot do. They will never stop their agenda until the people rise up and remember their own power.

Governments are service corporations only! They only have power because the people have given their power away.  We have unalienable rights as sovereign men and women.

Self-governance is where the people govern themselves.

But how are we, the PEOPLE, to acquire the moral self-mastery required for self-government?

Not only does freedom mean moral responsibility, but there can be “no happiness without respect and support for the natural units or groupings through which people exist, develop, and seek the higher purposes of life in concert with others.” Alongside the formal and artificial constructs of Canadian government, in other words, there stand certain “natural units or groupings,” such as family, church, neighbourhood, and voluntary association, that are responsible for the full development of human character through rigorous and sustained moral and civic education.  ~Unknown

We need to let go of everything THEY created and focus on a new parallel structure that is FOR the people BY the people. We need to create our intentional communities and PLAN Councils, and bring back the power to our TOWNS.

We, The People, have finally had enough of politicians and large corporations controlling this nation and WE demand that this destructive government CEASE and once again respect the people’s basic right to self-govern.

The term “self-governing” refers to the ability of individuals to exercise control over oneself.

It is the internal obligation one feels to do the right thing. It is the willingness of individuals to consciously choose and hold onto values and principles.

Unfortunately, the majority of the population are living meaningless and uninspiring lives and are living according to someone else’s values. They are ungoverned. When you are ungoverned, you blindly seek to follow those with perceived authority, even if they are guiding you on a self destructive path. So, the less you are self-governed, the more others will govern you and dictate, or become the author of, your destiny. But, the more you are self-governed the more likely you will rise and be given the opportunity to inspire others. The greater your self-governance, the greater your potential a happy and fulfilling life.

When you are unable to govern yourself, you become governed by others. Any area of your life in which you are not empowered and self-governed is an area in which others will overpower and govern you.

Every intentional community will teach self-governance. When you know thyself, you become inspired to fulfill a great purpose, you have greater clarity of direction and strategy, you are unwavering in action and are mentally and emotionally stable and focused on being of service to your community.

When you live congruently, or in alignment with what is truly most important to you, that is, your highest priorities or values and set meaningful objectives with brain and heart in alignment, you act respectfully, productively and wisely, and you become more purposefully self-governed.

The first step is Self-Awareness

Self-governance is being able to determine the cause and effect of any given situation and possessing a knowledge of our own behaviors so that we can control them. This means that a person determines who they ought to be and then plans to become that best version of themselves.

Self-Awareness includes understanding how we behave, how we perceive things, and how and why we act and react.

The following diagram comes from the teachings of Tony Robbins. It outlines the Six Basic Needs. 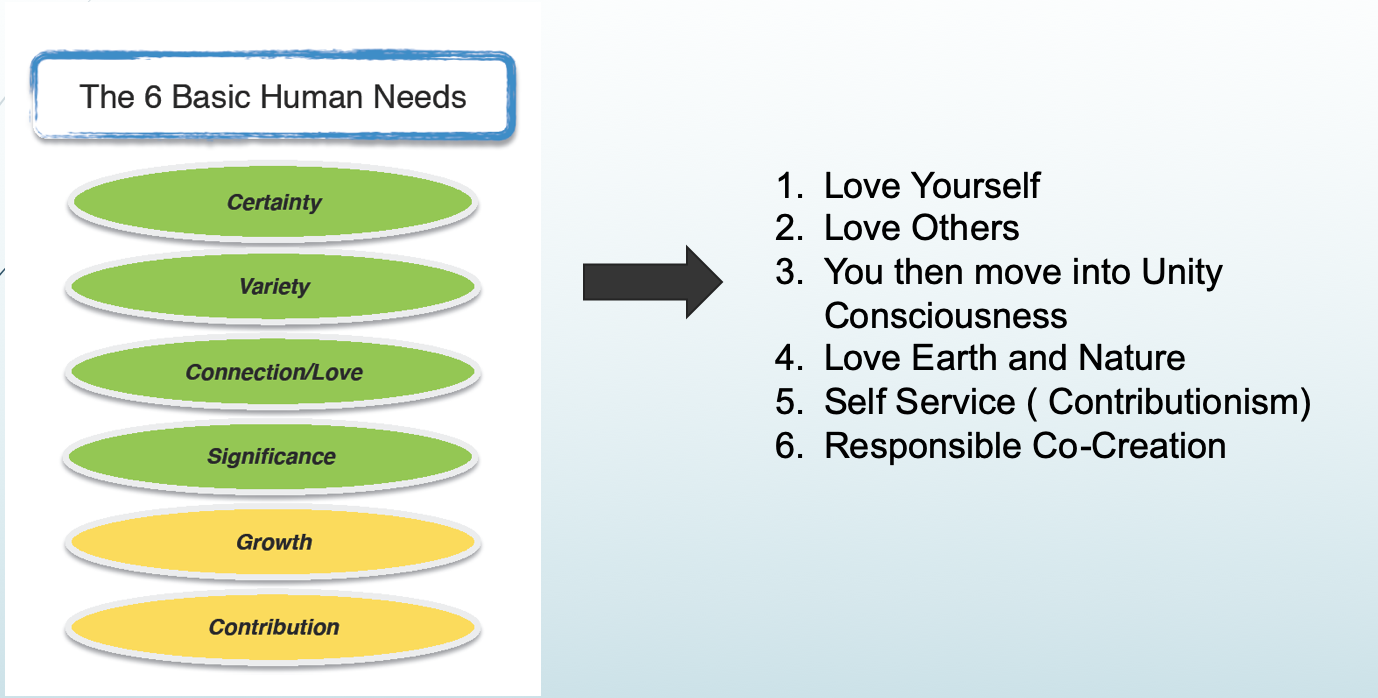 When you can control your own mind, emotions and actions, nobody and nothing else has to.

There’s always a reason why we act the way we do and the more we know our basic needs the more we can improve our lives.

The Second Step is Align with Your Higher Self

The Higher Self is defined as the part of the self that is connected to Source and transcends the ego, and ego-driven behaviours and responses. Ideally, the Higher Self is embodied in the set of moral qualities that a person possesses or one’s moral strength.

The self-governed person acknowledges that people have weaknesses, and accepts imperfections in order to keep working toward their plan.

Self-governed people try to catch themselves in weak moments and gently course correct themselves so that they inch ever closer to the highest version of themselves they know they can become; who they ought to be.This is not about being perfect; it is about growth and evolving into who you are meant to be.

We do have a long way to go, as many people are still locked up in the “political saviour program. Everyone is at different stages so please be patient with yourself and others. The great news is that many are waking up and realizing we no longer need to play in the devil’s play ground in order to be FREE.

The magnificence of who you are is far greater than any superior or inferior facades, personas or masks you could ever wear. The true, centered and masterful YOU self-governs, and in turn, leads and governs others through being an example of what is possible.

Self-governance is a lifetime pursuit and takes vigilance. The key is living congruently according to your highest virtues and values.

Tony Robbins – You can learn more about the six basic needs and how they influence behaviour here. https://www.youtube.com/watch?v=UdhGTvuUOys.